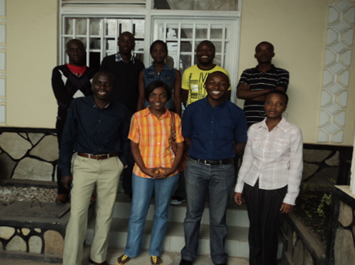 Rio+20 Global Youth Music Contest activities are going on all around the world!

See a report of Danny MBUYI, National coordinator of Global Music Youth Contest/Glocha in Democratic Republic of Congo below and photos attached as an example howthe global youth music contest approach helps to get involved youth and their creative potentials for the UN at very disadvantaged places of the earth

Photo of the entire team after the meeting with the coordinator Danny MBUYI, the right dressed, blue shirt and blue jeans, smiling

Dated 07 March 2012, AVDRDCONGO accordance with the tradition and its program to organize a monthly meeting every month to maximize our effectiveness in our approach, we organized a special meeting on a technical aspect namely the competition GYMC music, as well as specific concepts, on RIO 20 and the participation of the Congolese youth in this process, almost virtually ignored the part of many young Congolese, whose main purpose was that of strengthening the capacity of our members for RIO +20, explain how the process of the competition of Music, its advantages, and why participate?.
Were present at the meeting:
• Danny MBUYI Lukusa, Legal Coordinator DSA environmentalist;
• Christian Rugenera MASEMO, DSA Legal Secretary;
• Providence RUBAYI e Ir, VDD A1 Agronomist;
• David LYOKI MATOLEO, VDD Technician Rural Development;
• Emmanuel KAPIPA, and Ir Mechanic VDD A0,
• Alain NKIEDIEL AKWIR, electrician A0 VDD and Ir;
• Laurette NYOTA, VDD and Lawyer,
• Aline Mitima, VDD and Jurist;
• Olivier BARAKA, electrician A0 VDD and Ir;
• Ines Mvula, VDD and graduated in Tourism and Environment;
• Ambrose Kathina, VDD and Bachelor of Business Administration;
• Tom RWANIKA, VDD Computer Technician;
• Alide SADIKI, VDD and graduated environment.
Under the leadership of the National Coordinator we started the meeting whose agenda is as follows:
• What about RIO 20,
• Discussion on the global music contest, and a possible participation of our coordinator at the Gala Opening a RIO by IAAI
• Information coordinate activities during the month,
• Plan of action potential,
• Various,
For the first item on the agenda, the Coordinator and the Secretary made a brief presentations of RIO, and its contours
The second point which is the crux of the meeting concerned a great discussion on capacity building of our members according to the manual provided us during the Webinar, followed by the national coordinator, and there has been some readjustments in the wake of consensus of all present Volunteers. It was conventionally thought it better to reunite u panel composed of experts in music, for the jury to support a single application We also unanimously found that ingenious IAAI, given the work done by our coordinator for RIO, that it guarantees him at least to be present at various meetings and discussions like Rio in June, it will further assist was then resolved to proceed with the creation of a department of awareness called RIO 20 DRC. After this discussion and adoption of the new structure rehabilitated, we took a cup of coffee, before we separate between the Sustainable Development Volunteers attending the big meeting strategic hoping to meet us soon for further discussions
Thus the meeting, having begun to 14h, 18h has ended